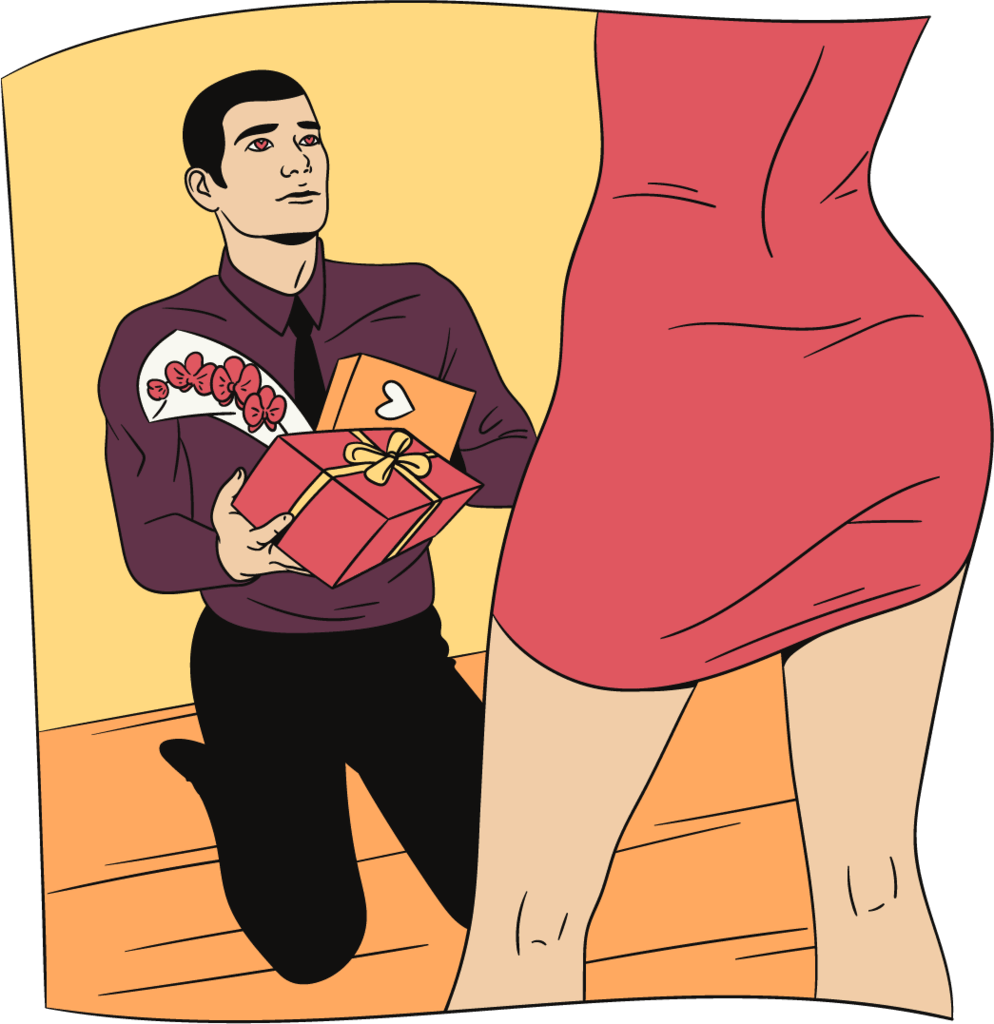 Recently I received a detailed story over email.

At the bottom there was one question:

“How do you make a guy crazy about you so that he’ll never even think about leaving you?”

Well, this is of course a huge question that I could write a book about. But to keep things simple, I will only give you seven pieces of advice to help you with this.

Here are the 7 tips to make a man want you bad:

To make a man completely crazy about you, you must first get your own life in order.

Self-confidence plays a large part in this.

After all, men love a woman who’s confident, and especially when this woman shows an interest in them.

So you must work to become self-confident if you are not already.

Most men are insecure because they don’t do enough with their lives. So they hope that a relationship will miraculously make everything better for them.

And this is sometimes true for women as well.

Watch out for this trap

It’s not true that having a relationship will fix all your problems and instantly make things better for you if you’re not feeling good about yourself already.

It’s not ideal to start a relationship with someone when you are not happy.

Because if your entire well-being rests on the shoulders of another person, then your whole foundation is very fragile.

It’s also too much to ask from one single person.

If you enter a relationship with a guy and he becomes your source of happiness, you’ll automatically become very needy, clingy,, and dependent on him.

Those are all very unattractive qualities that will drive most men away very fast.

So instead of doing this, you should strive to get a solid foundation within yourself that you can always rely on

So make sure you surround yourself with great friends, you do things that make you happy, and that you continue to develop yourself so that you become the high-value self-confident woman you can be.

When you are actively working on your foundation, you will see that you’ll get more attention from great guys who’ll become crazy about you.

Something that will drive a man wild is a woman who makes him feel good about himself.

And as logical as the following may sound, a man can only feel good in a relationship when he feels like “the man”.

If you can make him feel this way he will automatically find you a lot more attractive.

This alone can ensure that he can’t get enough of you.

So making him feel manly is a simple way to make a man want you bad.

“Okay but Tim, how can I make him feel manly?”

It’s a lot easier than most women initially think.

The best ways to accomplish this:

Exactly, it’s as simple as that.

So when you’ve been to the supermarket and you’re carrying a heavy bag, ask him if he can carry it for you, (if he doesn’t already).

At that moment he will immediately feel manly and strong.

And whether you can carry this bag yourself is not really important, the important thing is that you give him the idea that you need him.

He wants you to see him as a real man

If you do everything yourself and never ask him for help, he will not get this feeling.

He will like you less and become uncomfortable in your relationship.

Don’t get me wrong, it’s great if you are an independent woman who can do everything yourself.

But letting him help out once in a while (even if you don’t really need him to), is a very simple and great way to get him to want you more.

This is also a very important step in making him fall in love with you. 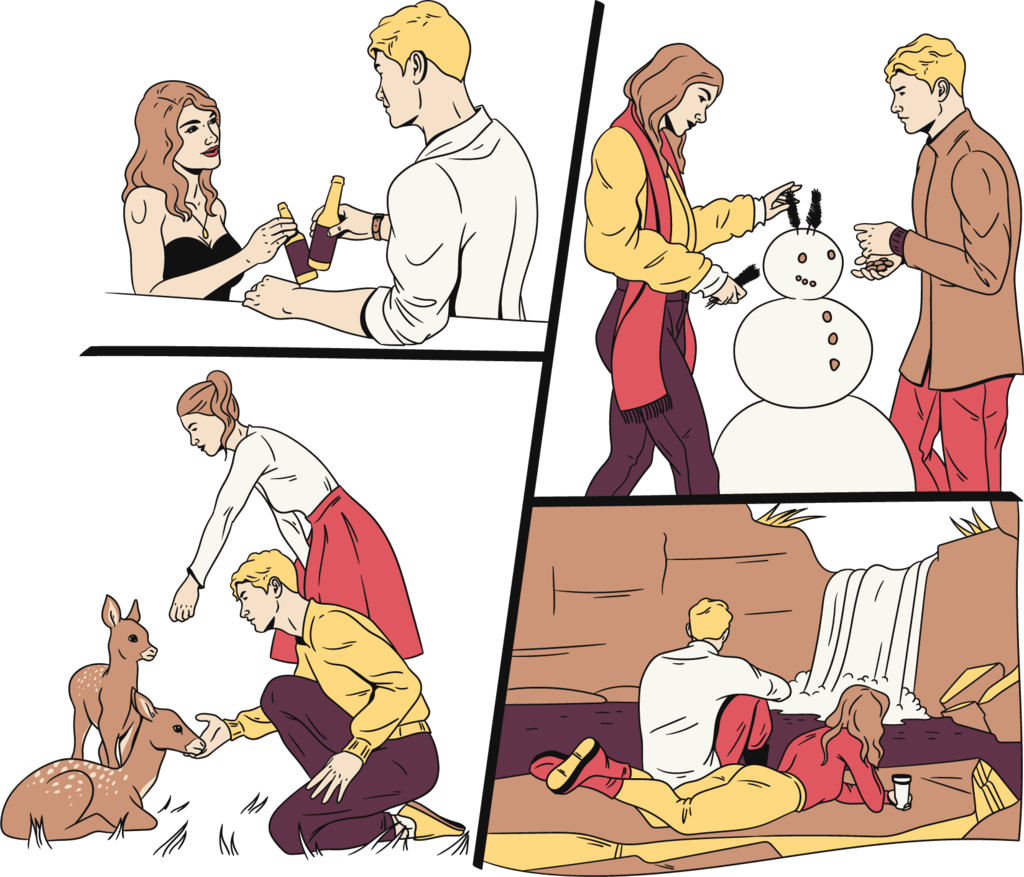 In the world of relationships and dating, predictable is another word for BORING.

And I can imagine that neither of you is looking for a boring relationship, right?

To make him crazy about you, it’s therefore important to interrupt your daily routine now and again.

What often happens is that a relationship between a man and a woman is very exciting and they do different things in the beginning.

But then comes a time when they both often make less effort for each other and they think:

I don’t have to make the same effort anymore as we are now in a relationship.

And between you and me…

Men are scared to death that a woman will make less effort for them once they are in a relationship.

That is why it’s so important to be unpredictable now and again, especially early in the dating phase.

This will make him curious, simply because he’s never completely sure where he stands.

So, for example, don’t go for a drink in the town every time, but surprise him once by taking him to the petting zoo.

(or use one of these other creative ideas for a date)

Simply make sure that he doesn’t always know where he stands, it’s guaranteed to drive him crazy.

4. Let him make an effort for you 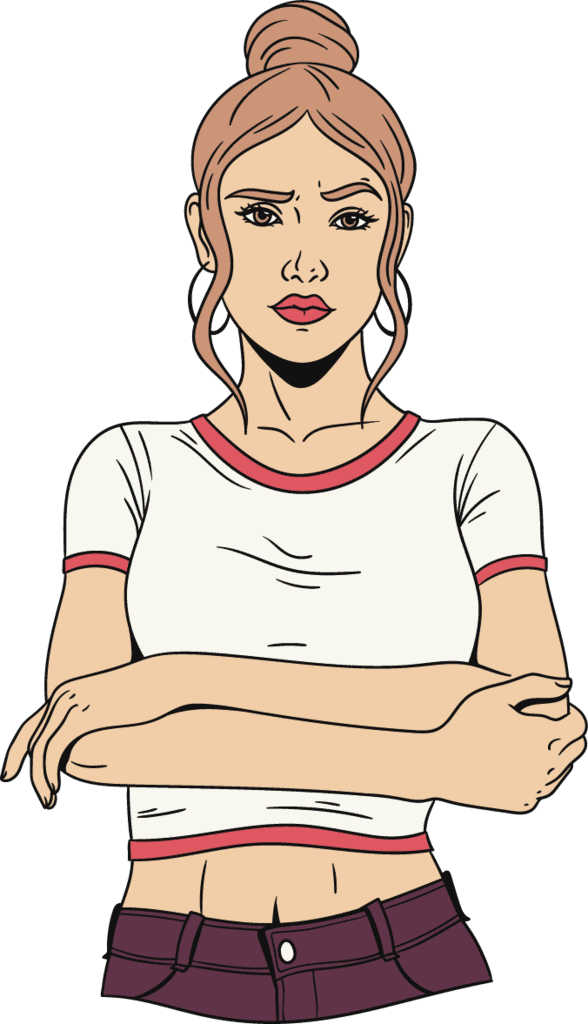 You hear me say it time and time again, men want to hunt.

When a guy doesn’t have to make any effort for you, it’s almost impossible that he will feel attracted to you.

So when you reply to all his messages within five seconds and always say “yes” to all his requests, he will soon get bored.

Because when a man thinks you are too easy, he will quickly lose interest

By the way, I don’t mean that you should always play ‘hard to get’ and act as an ice queen.

What I mean is a woman who says:

Yes, I like you, but I’m not that easy. If you want to win me over, you must do your best for me.

If you can convey this vibe to him, you will drive him crazy with desire

You can do this by asking him to spend a lot of time with you.

For example, if he asks you to come around on a Tuesday evening at 10 pm, you could say something like:

Sorry, but I am not the type of woman that comes around at that time. But because I like you, we can go for a coffee in the town on Saturday afternoon.

This lets him know right away that you are not an easy “prey”.

And although we don’t admit it, men really like this.

Because if there is anything that makes a man obsessed with a woman, it’s things like this.

Plus, in the example above there is something else that can make a man crazy about you, namely: 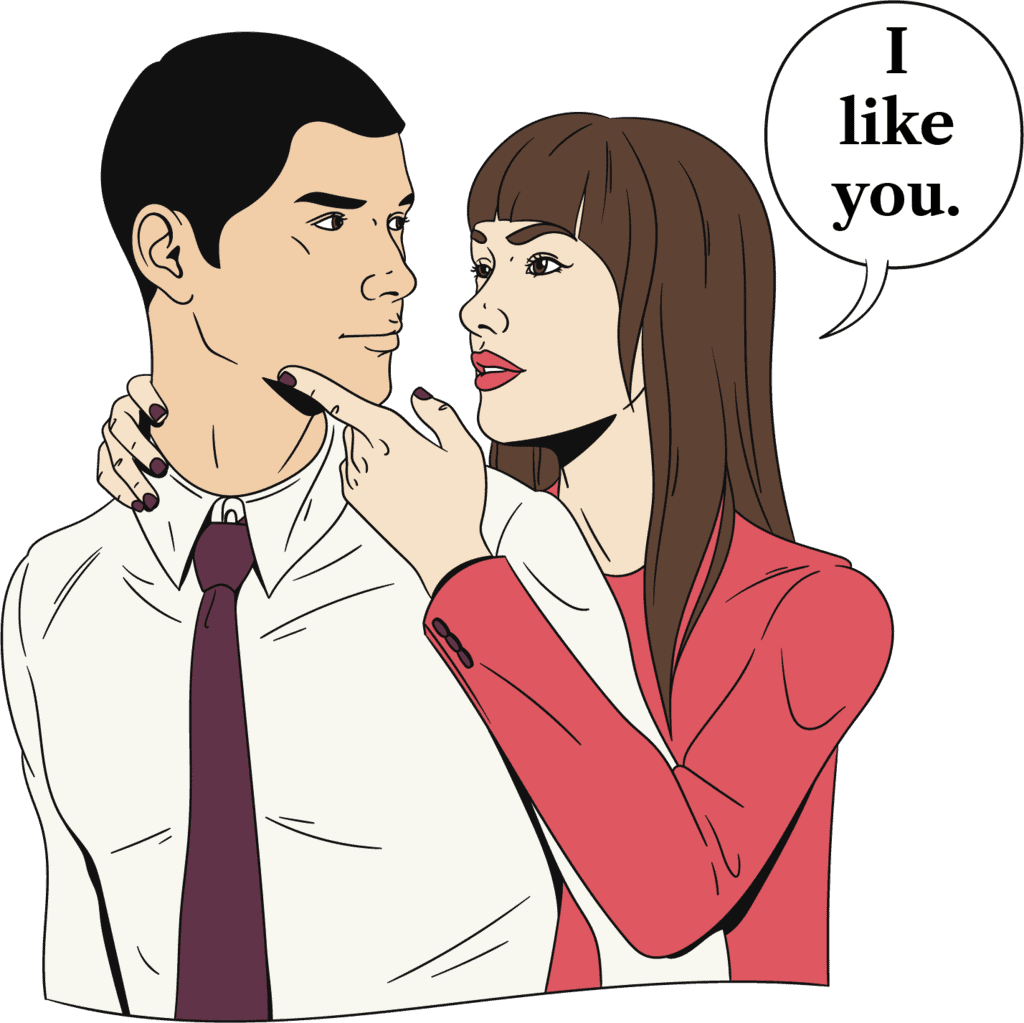 We already discussed in the previous tip that it’s good to let a man make an effort for you.

But once in a while, you should let him know that you like him. Because when a guy is not completely sure whether he’s got a chance, he will most probably leave you (to protect himself).

Therefore you should let him know now and again that you like him, then he will think:

Gosh, I have a chance with her.

And when a guy has this impression (and he likes you) it doesn’t take much to make him completely crazy about you.

6. Sometimes be unavailable to him

Okay. When women do this to me, I hate it, but I have to admit that it works pretty well.

So here’s what you do…

It will confuse him a lot when he loses your attention after he first had it.

And with all mammals, if he gets a random reward (in this case your attention) then he wants more and more of it.

Once it’s obvious that a guy has got your attention whenever he wants, the relationship soon becomes boring for him

But when you give a man attention randomly, you can drive him absolutely crazy.

This may sound strange but you see the same principle at play in every form of gambling.

Think about it: why do you think that so many people are addicted to gambling?

This only makes the gambler long for the “reward” even more and before he knows it, he is addicted to it.

These easy but subtle things signal that you have important things going on in your life and that he’s not the highest priority for you, which are all very attractive qualities in a woman.

Just by not being unavailable to him sometimes and living your own life you’ll immediately find:

And before you think:

“Yes, but I don’t want to play a game with him” or “What if he meets somebody else when I’m unavailable to him?”

I understand you completely, but in fact, everything is some kind of a game when you are flirting with a guy.

And remember, you are not only doing yourself a favor but him also.

A man (even if he says he doesn’t) wants to make an effort for you, and by not always being available to him you accomplish this very effectively. 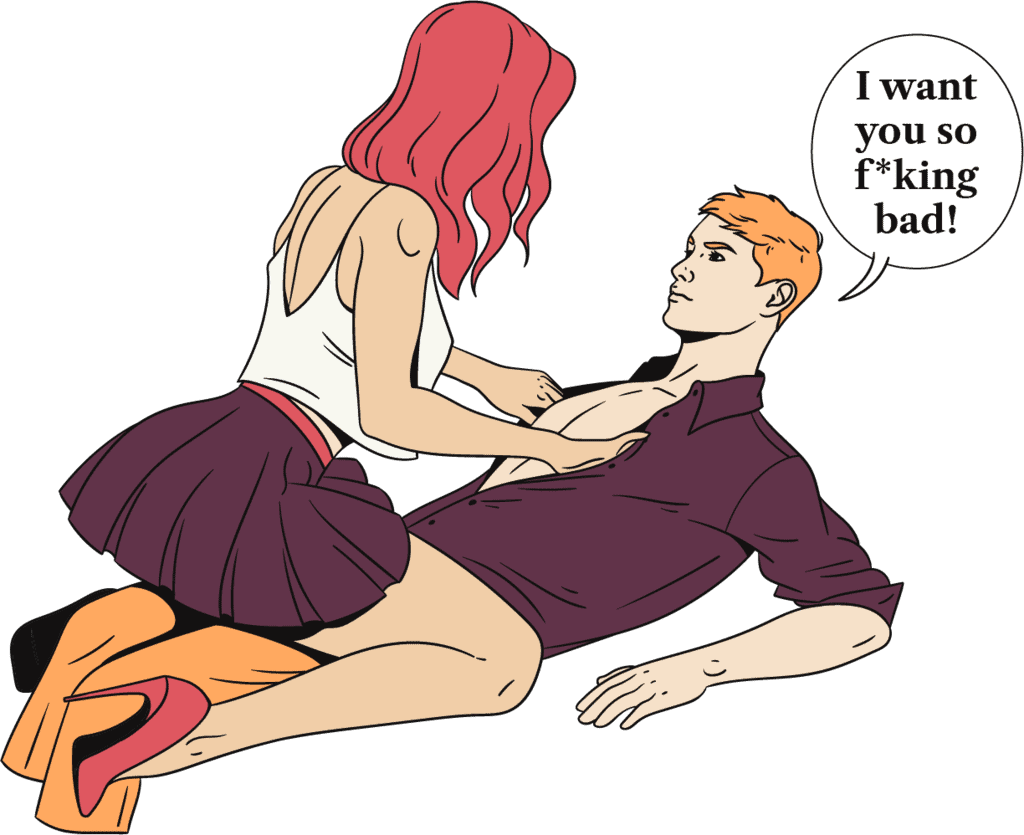 It’s no secret that a good sex life contributes to a better relationship.

And if you can make a man go crazy in bed, he will immediately like you even more than he already did.

Alright, this might sound very logical, but making a man go crazy in bed is not that easy.

In fact, it’s something that many women are unsure about.

This week I even received the following question:

To make a man go crazy in bed, it’s essential to know what men want in bed and during sex. Here are a few things men like:

These kinds of things can make him go crazy in bed.

Want to read more? These are only three tips to make a guy go crazy in bed, in this article you will find in total 17 things men want in bed but will never tell you.

Don’t forget to check out these two related articles:

Facebook-f
Instagram
Youtube
PrevPreviousIs He Using Me For Sex? 16 Clear Signs He Only Wants To Sleep With You
Next12 Simple Tips To Play a Player: Make Him Chase You & Fall in LoveNext