Is He Still In Love With His Ex? 7 Signs He Is NOT Over Her
Skip to content

Is He Still In Love With His Ex? 7 Signs He Is NOT Over Her 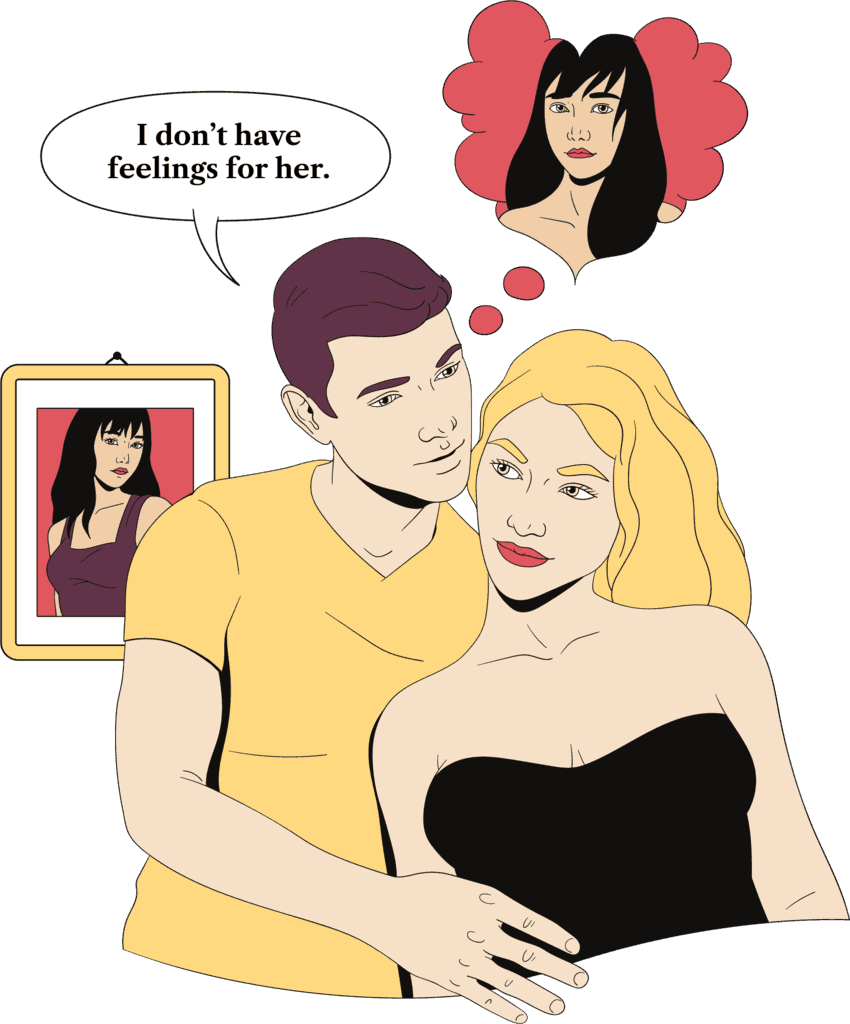 I recently received a question to which I, unfortunately, had to give a very simple answer. One woman asked me:

“I’m right now in a relationship with a man. We began seeing each other after he broke up with his ex-girlfriend only three months earlier. I’m wondering, Is he still thinking about his ex?”

And like I said, I had to give a simple answer:

And to clarify my answer a little bit…

“Does he still love his ex-girlfriend or ex-wife?”

That’s something you need to understand, and I think you’ll realize it when you look at the situation yourself.

Because here’s the thing. When you’ve had a long relationship with someone, and the relationship suddenly ends… Of course, your feelings for that person don’t suddenly just go away after a couple of months.

This is something he says purely to keep you from feeling insecure.

He knows that you love to hear this, so that’s why he says it.

But going back to the question:

Yeah, he’s still thinking about his ex. And yes, he probably loves her, too.

And it DOESN’T mean that he wants to go back together with her either.

Because as a human being, you can’t forget someone you’ve loved just like 1…2…3.

And somewhere I doubt whether that was actually the question she meant to ask.

So perhaps I’m going to do something very manly and stupid: answering a question that hasn’t been asked to me at all.

I think the woman who e-mailed me actually meant to ask the following:

Here are the 7 signs that he’s still in love with his ex, and that he’s NOT over her.

1. He hasn’t cleaned up her stuff yet

Suppose her stuff is stacked in boxes in the aisle. That’s not such a big deal and nothing to worry about.

But if there are still things from her laying around, that’s often because he hasn’t fully processed the whole breakup situation yet.

If that’s a bad thing? No, not necessarily.

A break-up is very similar to the mourning process: someone ‘loses’ a loved one or a lover.

And you can see that people who lose a loved one, usually leave their belongings in the house, so it feels like that person is still there.

This is human and often part of someone’s grieving process.

Therefore, if your boyfriend or partner still has some stuff from his ex laying around here and there, it’s a clear sign that he misses his ex-wife or ex-girlfriend.

I hope this isn’t the case with you, but perhaps he keeps bringing up things like:

“I remember when  (name of his ex) and I were in Paris. First, we went here, and then we did this… “

Well, this could happen occasionally, by mistake.

(Which doesn’t change the fact that it’s super uncomfortable for you.)

When a guy talks about his ex to you, it sometimes just means that he was clumsy and made a mistake. Men most of the time don’t do it on purpose.

But if constantly brings up old memories of him and his ex, that’s a very bad sign.

In sign #6 I’ll explain how you can prevent him from saying these kinds of things in the future.

3. He systematically does all the right things

For the third sign, I need a little bit of your female intuition. But I know that as a woman, you can often assess this very well.

Let’s suppose you just entered into a relationship with a guy who seems to be doing all the right things, such as:

It’s as if he ‘routinely’ does all the right things.

And in the meantime, you can tell that he’s not one hundred percent there.

It’s like he treats you as if you were his girlfriend, but you can tell that he’s not one hundred percent present in the situation.

If a guy does this to you, it’s not a good sign. Because then chances are that he is using you as a replacement for his ex-girlfriend or ex-wife.

And does everything he used to with his ex

So he does everything exactly the way it was but he’s only replaced the woman.

And that’s, of course, a very painful realization.

But unfortunately, it’s something that happens more often than you think, as I’ve heard a lot of men and women describe similar situations.

Anyway, if you feel that he’s doing this to you, it’s a very clear sign that he’s not completely over his ex.

4. He gets upset when his ex is dating someone new 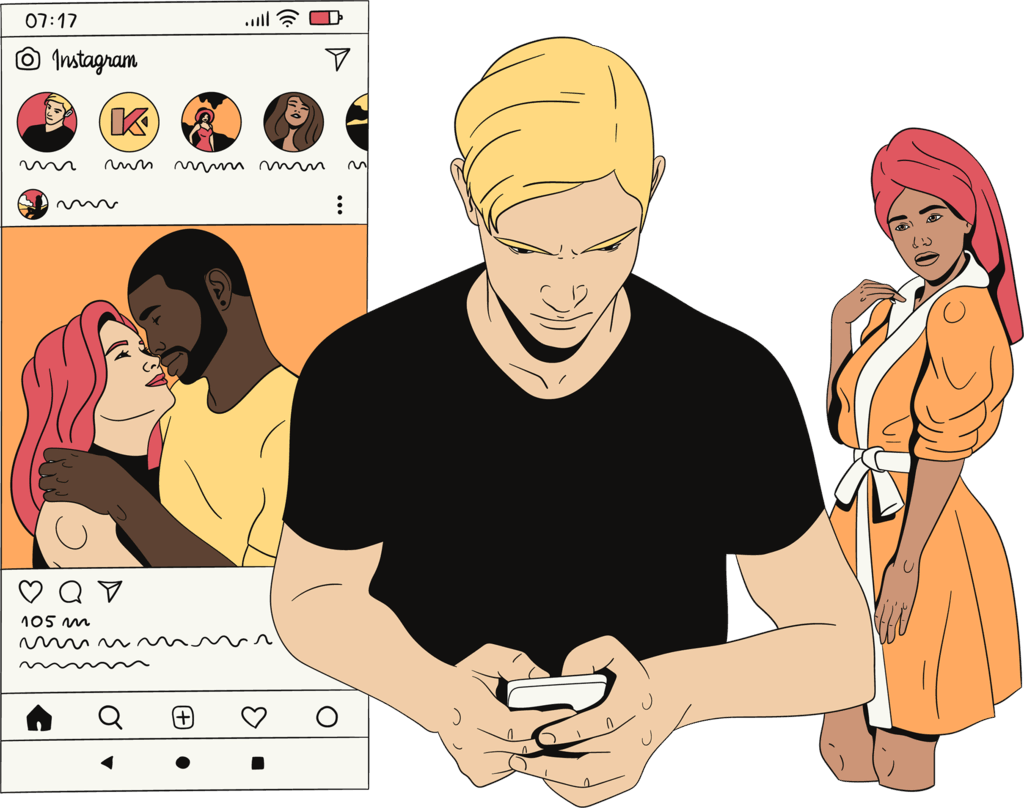 I got an e-mail the other day from a woman who said:

“I’ve been with a man for six months now. He just got out of a two-year marriage and I was single for a while.

At the beginning of the relationship, this caused a lot of hassle. He still had feelings for his ex. Well, I thought it was heading in the right direction, but lately, he’s been very depressed. Why I don’t know exactly. He did tell me the other day that his ex was dating someone new, and that he was happy for her.

Could it be that this has something to do with it? I think my boyfriend still has feelings for his ex”

Let’s cut to the chase:

“Yeah, this certainly has something to do with it.”

When a guy feels depressed the minute his ex is dating someone, I guarantee that’s one hundred percent a sign that he’s not over her yet.

This is a typical case of jealousy

But as you may know, men are just like children when it comes to jealousy: it doesn’t take much to make them jealous.

So the fact that he’s depressed doesn’t really mean that much yet.

But how long he’s being depressed is much more important.

If a guy is sad for a day, it’s not a big deal. But what if it goes on for a week or more? Yeah, then it’s obvious he’s still not over her.

5. He’s still talking to his ex

Before you assume the worst: if he still talks to his ex-girlfriend or ex-wife, that’s not necessarily bad.

All right. You get the point.

At which point is him talking to his ex too much?

To figure out if he’s not over his ex, there are two things you should consider:

These two things are crucial.

Suppose he has children with her. He sends her a daily message (one type of contact) to ask how the children are doing (why).

Well, then you can’t blame him.

In this case, you should be happy that he’s being a good father.

But suppose their relationship ended one year ago. You live in one city and she lives in another. But they still text each other often (he won’t block her) and occasionally meet with each other (she won’t leave him alone?).

Yeah, then it’s too much

And even if he says: ”We’re just friends”, you have every right to let him choose between you and her.

At least if it bothers you.

Then ask yourself why they’re still in touch, and find out how often and in what way they have contact.
And if you don’t like this for whatever reason, it’s a very bad sign.

If your boyfriend talks to his ex behind your back

There are two types of instances that would be aggravating factors. If you find out that he’s doing any of these two, it means that he’s definitely not over her.

If you notice any of these, then you can be sure that he still likely has feelings for her, and might even consider getting back together with her.

6. He compares you to her 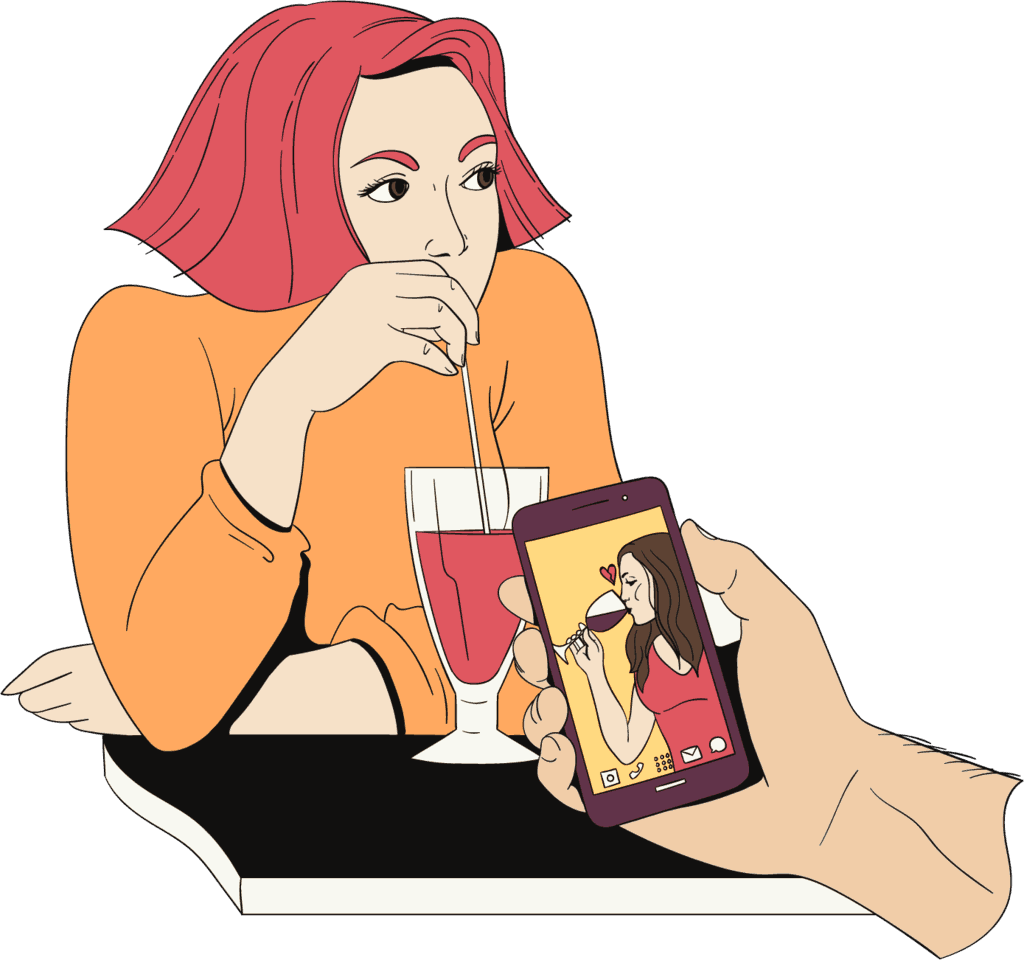 It’s never cool when a man compares you to another woman, especially when that woman is his ex-girlfriend or ex-wife.

But it’s good to know that men often don’t do this on purpose. No sane man wants to make his girlfriend insecure.

Then why is he doing this?

You’re not gonna like the answer to that question…

He does this because he’s still thinking of his ex.

The fact that he’s talking about her simply means that she’s on his mind.

It’s as simple as one plus one equals two.

In short, he hasn’t fully processed the whole situation yet.

Bonus tip: Describe how you feel about this

I sometimes find it hard to admit, but men are incredibly stupid and especially when it comes to non-verbal signs.

So suppose that he compares you to his ex, and he doesn’t realize that he’s hurting you? Then tell him!

Let him know how you feel, the moment he does it.

Because I sincerely believe that he’s got your best interests at heart.

However, men rarely understand the impact of certain actions, that’s why they sometimes send you mixed signals.

7. He hasn’t yet introduced you to his family and friends

And I don’t mean after the first two months. But if you’re a year down the line and he still hasn’t introduced you to his friends and family?

Yeah, then there’s really something going on. He might be afraid to commit.

In which case, you can read here how to best deal with that.

After all, it’s when a man introduces his new girlfriend to his closest ones that he ‘officially’ replaces his ex.

So if he doesn’t do this, it means:

He can now go to a family birthday, without the situation becoming uncomfortable since he hasn’t introduced them to anyone else in the meantime.

So if he’s not willing to introduce you yet, it really means that he’s not ready to replace her yet. And that he’s actually having some kind of backup, so he can get back with his ex.

Disclaimer: Given that you’ve been dating for longer than a few months.

What it means if you notice a couple of these signs

If you recognize some of these signs, and you’ve only been dating for a few months, then there isn’t much cause for concern.

Just give it some time.

It doesn’t necessarily mean anything bad.

It’s stupid that people often think rebound relationships (you know, when someone moves quickly from one relationship to the next) are bad by definition.

Scientific research shows that it makes NO difference at all

You can read all about it here if you don’t believe me.

So don’t take it so hard if he’s not quite over his ex yet. You just started dating.

It would be more worrying if he would instantly forget about her.

Because those men are much more dangerous. Those guys can distance themselves from a woman without giving a damn.

So again, just give it some time. But don’t settle for a friends with benefits (FWB) relationship with him.