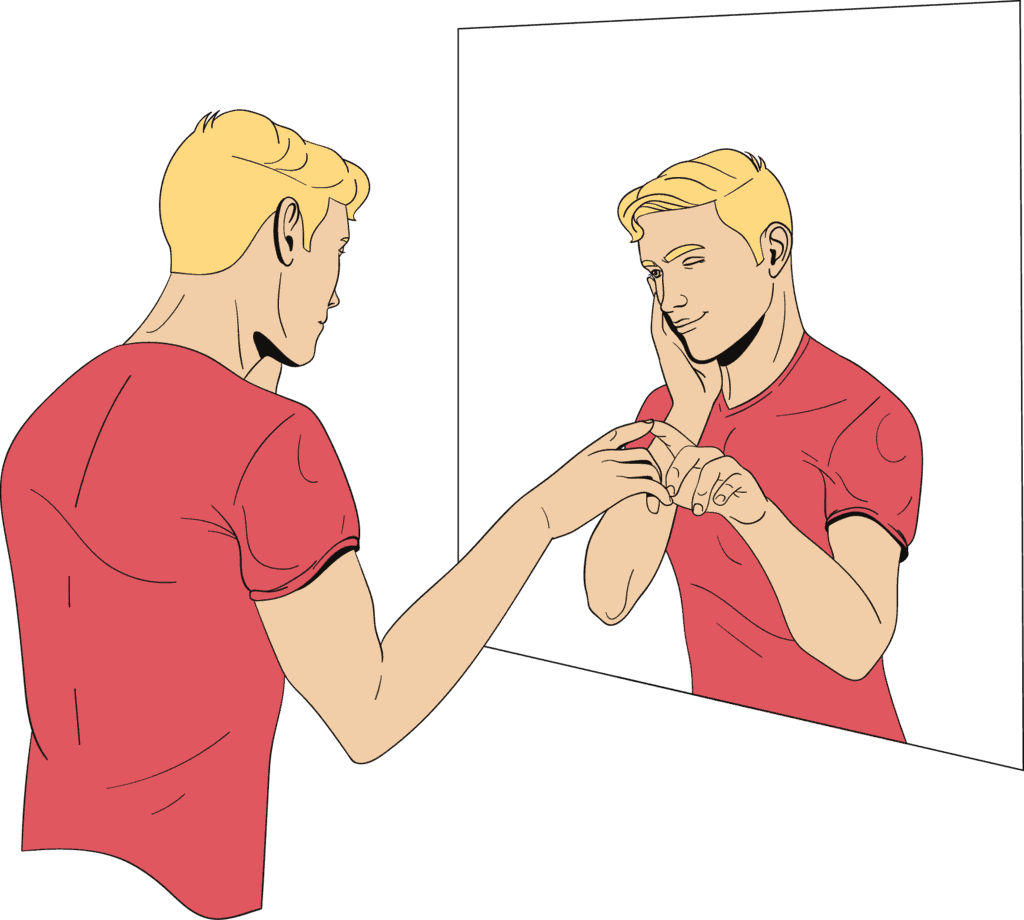 Before we start, I want to warn you.

I’m not a doctor or a psychiatrist. And I don’t think you should diagnose your husband, boyfriend or partner on the internet based on signs, traits, or patterns from a “narcissism test” “is he a narcissist.“

That’s up to a doctor. And they’re having a hard enough time making an accurate diagnosis.

If it takes a long time for a doctor to make such a diagnosis, do you think I can do it in a video or an article? Of course not.

I’ll leave that to the professionals.

There are several mental illnesses a man can suffer from. But one of the toughest is narcissism.

“Am I dating a narcissist?”

If you’re dealing with a narcissistic guy, brace yourself.

Getting into a relationship with him will be hard on you.

There are plenty of reasons why such a man can be very attractive. I will soon get to that.

But you’ll have to know how to deal with the traits of his narcissism. And that’s what most of this article is about.

What to do if your partner has a narcissistic personality disorder

This information is therefore not aimed at the women who are wondering if they have a narcissistic man.

But to those who have been told so by their doctor, and want some tips on how to deal with his impulses.

I’ve written the following advice for them.

And he may well have characteristics that aren’t listed here or that he lacks specific traits.

Below you will find the characteristics of a narcissist. And the ways that can affect your relationship. 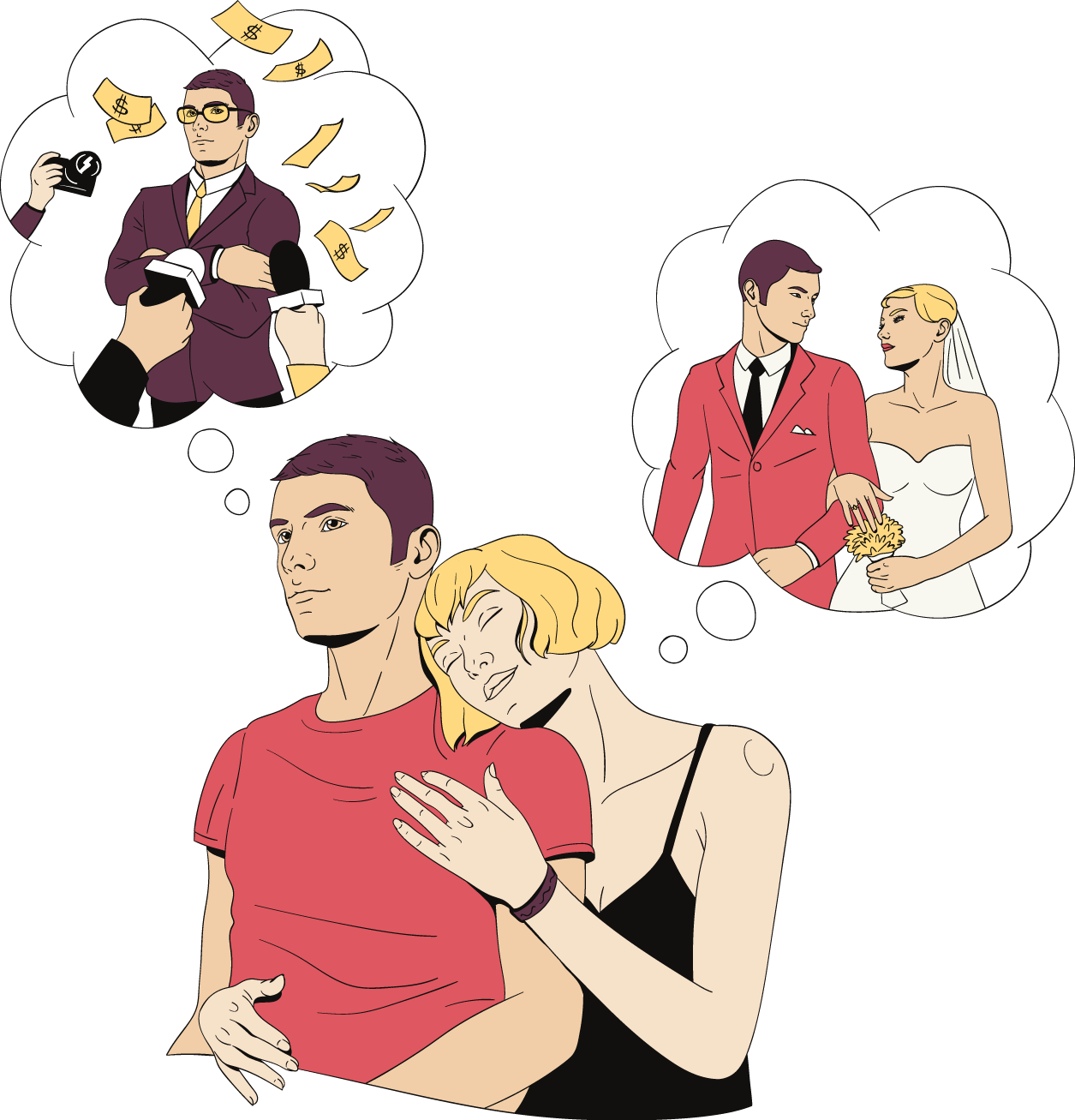 A man who has more to do in his life than chasing you is obviously attractive. Only a narcissist would take this to the extreme.

Often all four at once.

In this case, his goals usually do not reflect reality:

In many cases, he’s nowhere near what he’s pursuing. But his arrogance about this has no limits. And the problem is that he’s ruthless in its pursuit.

If he has to sacrifice his relationship with you, he will.

He’s only semi-present in the relationship

If he has symptoms, traits or behaviors of narcissistic personality disorder, he always comes first. There’s no room for anyone else. Not for you either.

So if you are upset that he doesn’t give you enough attention:

Get used to it. Because he’ll never change.

On the other hand, it can have many advantages if this man actually succeeds in getting the power and the money he desires.

Are there any benefits to having a relationship with a narcissist?

Dating a rich man has its advantages. Just like dating a powerful man.

This is sometimes a sensitive issue. People say:

“Tim, how can you say that? Dating a narcissist only has disadvantages, right?”

But it’s similar to dating an older man:

He can give you experiences a younger man simply can’t offer you.

So, of course, dating a man with life experience and more power is attractive. Whether he’s a narcissist or not.

This is the harder part of dating a man with narcissistic traits.

At first, you can fall for it. And think that he’s really as great as you thought he was.

But if you have a relationship with him, you may find that his qualities are grossly exaggerated. And that he doesn’t realize this himself.

A narcissist likes to maintain an illusion

As soon as you start to mess with this, the narcissist can get angry or wants revenge.

So it’s better to choose not to do this unless this person trusts you enormously.

And the question is whether you want to be with someone who lives in a dream world or not. 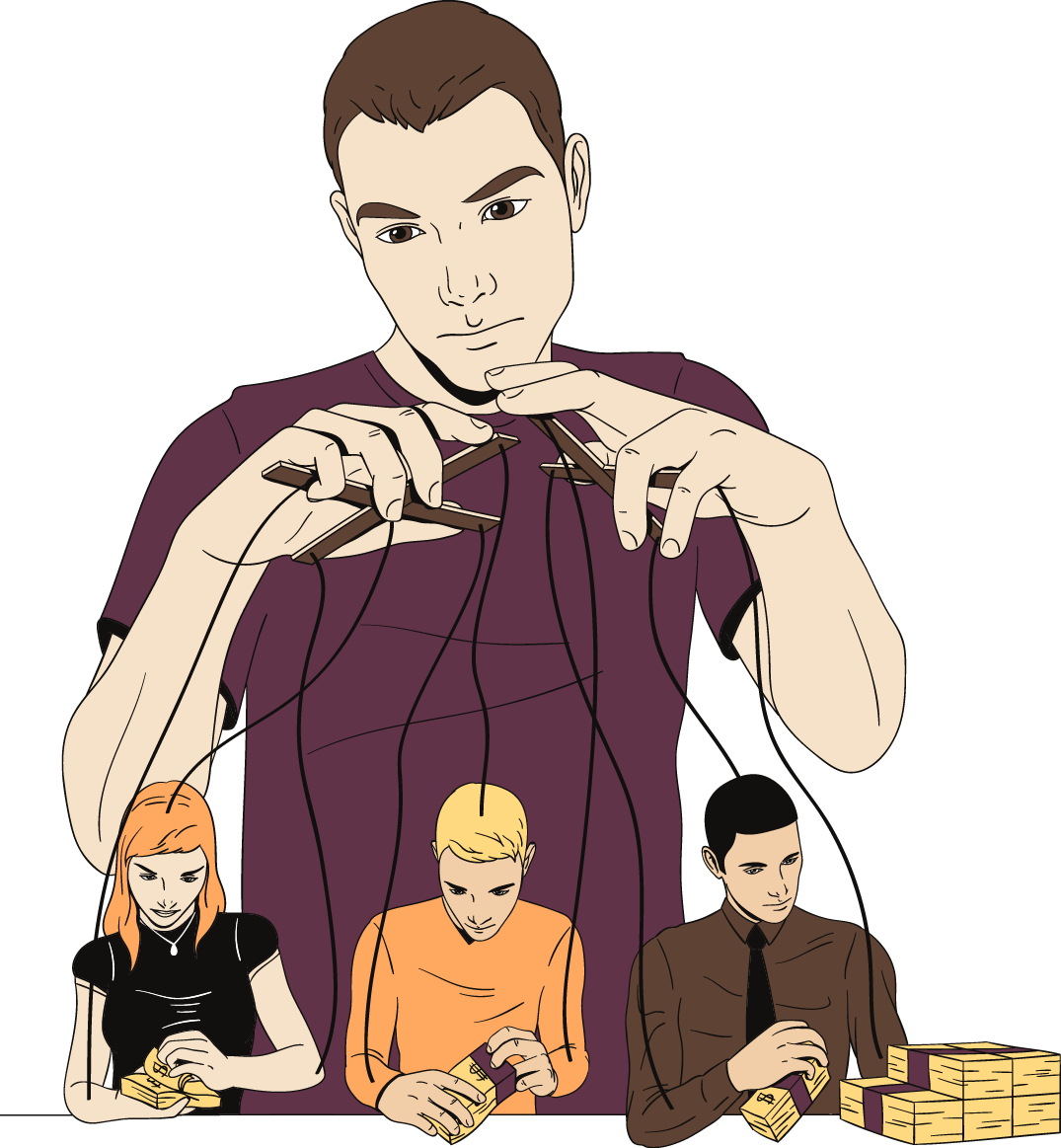 A narcissist always puts himself first.

It means that if he wants to achieve or have something, he can go right through you. Even though he says he loves you.

A small thing can be completely blown out of proportions. His need for space and distance is more significant than it is for other men, especially during crucial moments.

A narcissist is not empathetic

He may tend to present himself as “vulnerable.”

But as you’ll later find out, a narcissist has little vulnerability. And this is just a means of getting his way.

You could say a narcissist is disturbed. But that’s more the domain of a psychopath.

He is usually violent, and not narcissistic. Sometimes this happens, you can read more about it in trait #9. 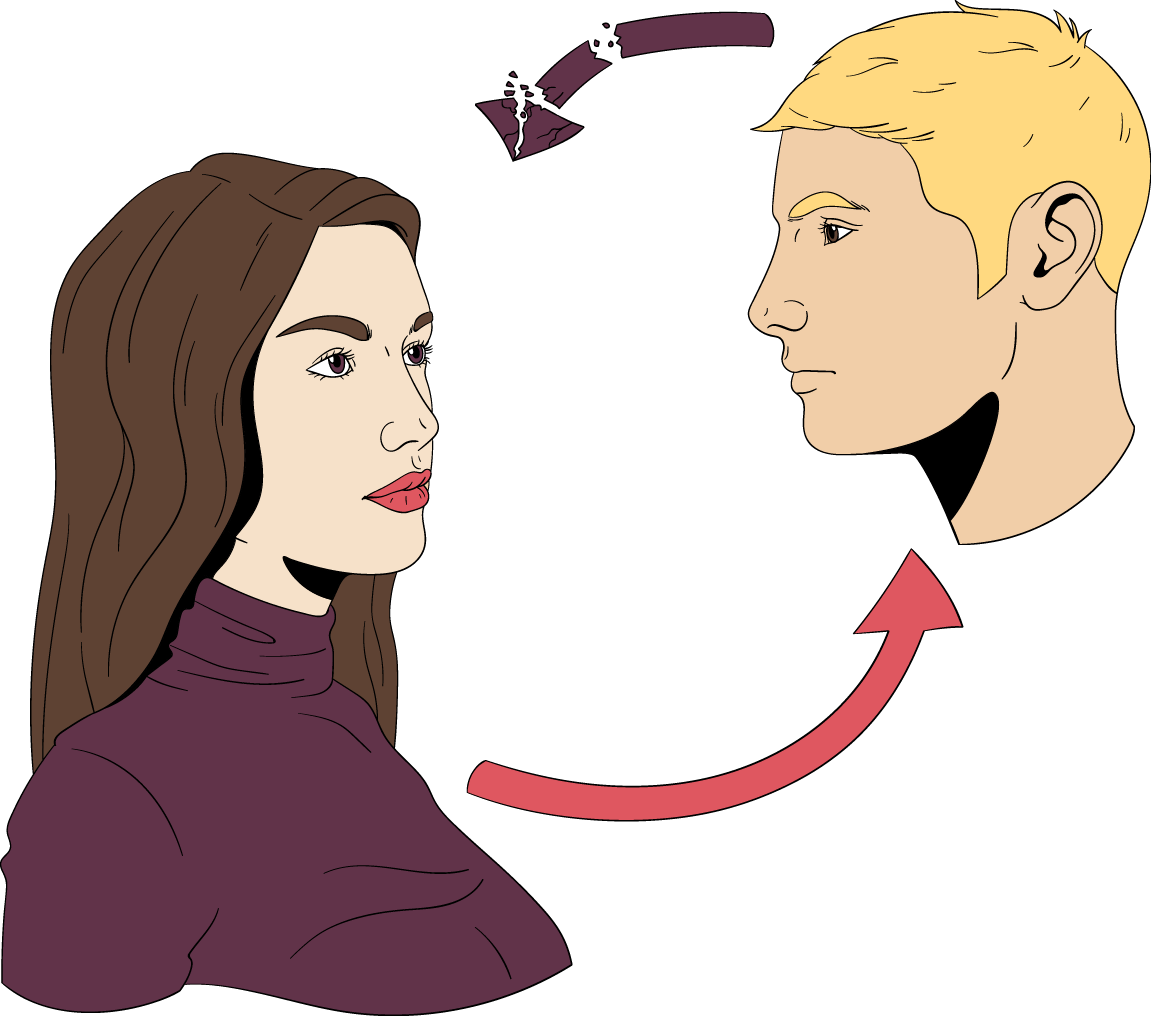 This is where things go wrong.

I know a woman who has a relationship with a man with a narcissistic personality disorder. He’s unable to show empathy on his own. He has to “fake” it.

At first, he got away with it.

But as the relationship develops, you’ll notice that his attempts to charm you with his empathy diminishes. It all comes across as fake and inauthentic.

And at some point, you’ll find that if empathy doesn’t suit him, he’ll just stop.

Train him to be mindful of you

The other side of this is that you can teach him to be mindful of you.

He may not be able to feel it, but if he loves you, he may be willing to be more empathic on the points that you indicate.

If you explain to him how he hurts you, he will do his best to stop hurting you at that moment. That is if you openly discuss it with him and he agrees to it.

Since narcissists are sometimes under the impression they can’t do anything wrong, it’s sometimes difficult to make him see this. 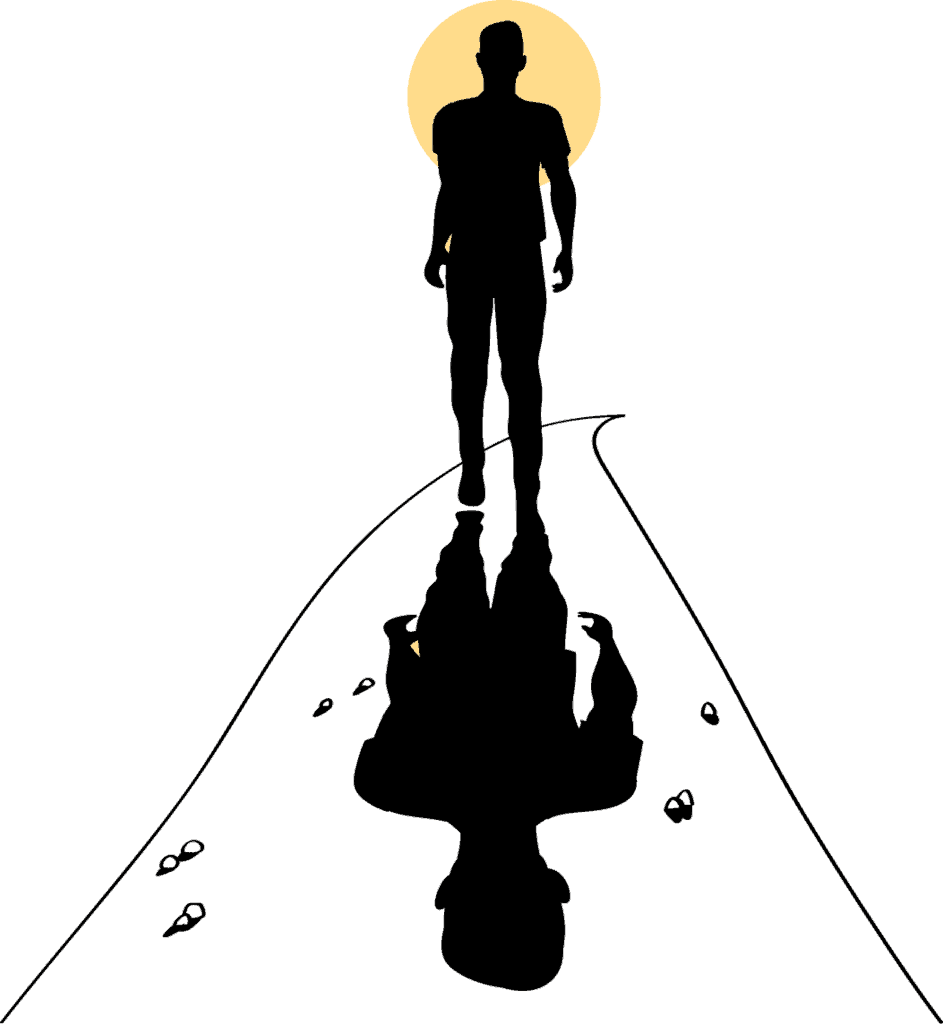 The sooner you realize that he is sick and will not change, the better.

Many women think they’ll change the narcissist during the relationship.

They believe they can teach him to empathize, to love, and to be kind to puppies and small children.

But a narcissist has a disorder

His mind cannot be changed. He is who he is. And that’s not going to change.

You can teach him a new behavior, but you can’t change the nature of the beast. As a result, as long as you stick with him, you will always be with a man who is sick.

If that’s the choice you want to make, I won’t stop you. But your life will be a lot harder than with another man.

If you want more clearcut advice on how to best deal with a narcissist in a relationship, I talk about that in-depth here. 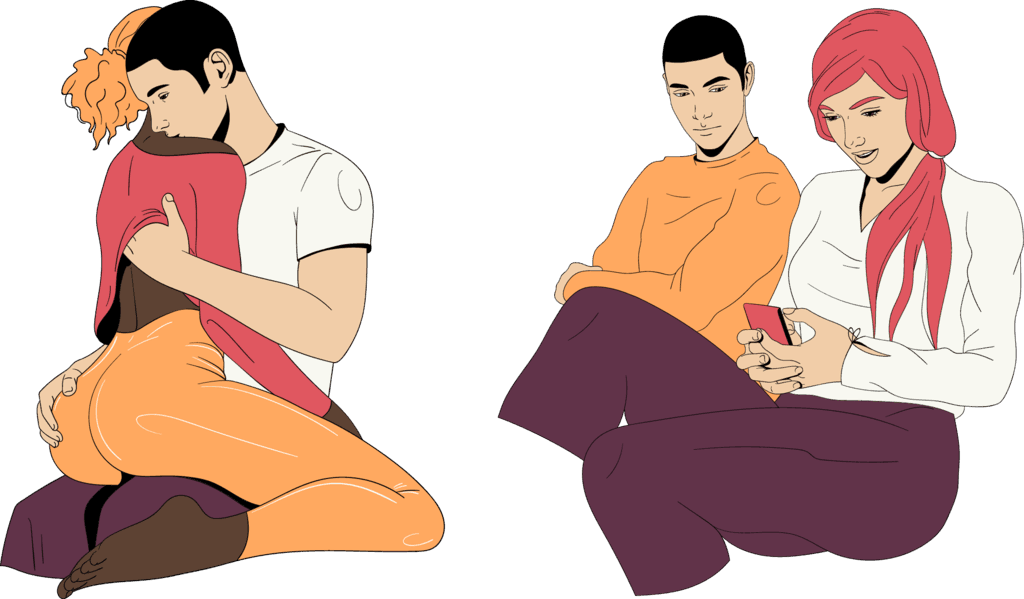 This is very striking. But a narcissist can cheat on you, and be extremely paranoid of you at the same time.

In that case, he can accuse you of sleeping with everybody. And keep a close eye on your phone to see if you can be trusted.

When he at the same time, is in fact cheating on you and having multiple affairs with different women.

I’ve written an article before about how you guard your personal boundaries. You want to make sure you don’t let the narcissist overpower you. And that you walk away from the relationship, if necessary.

If you can’t stay away from him and you still want to be with him, consider an open relationship. Then he can do whatever he wants, but so can you. 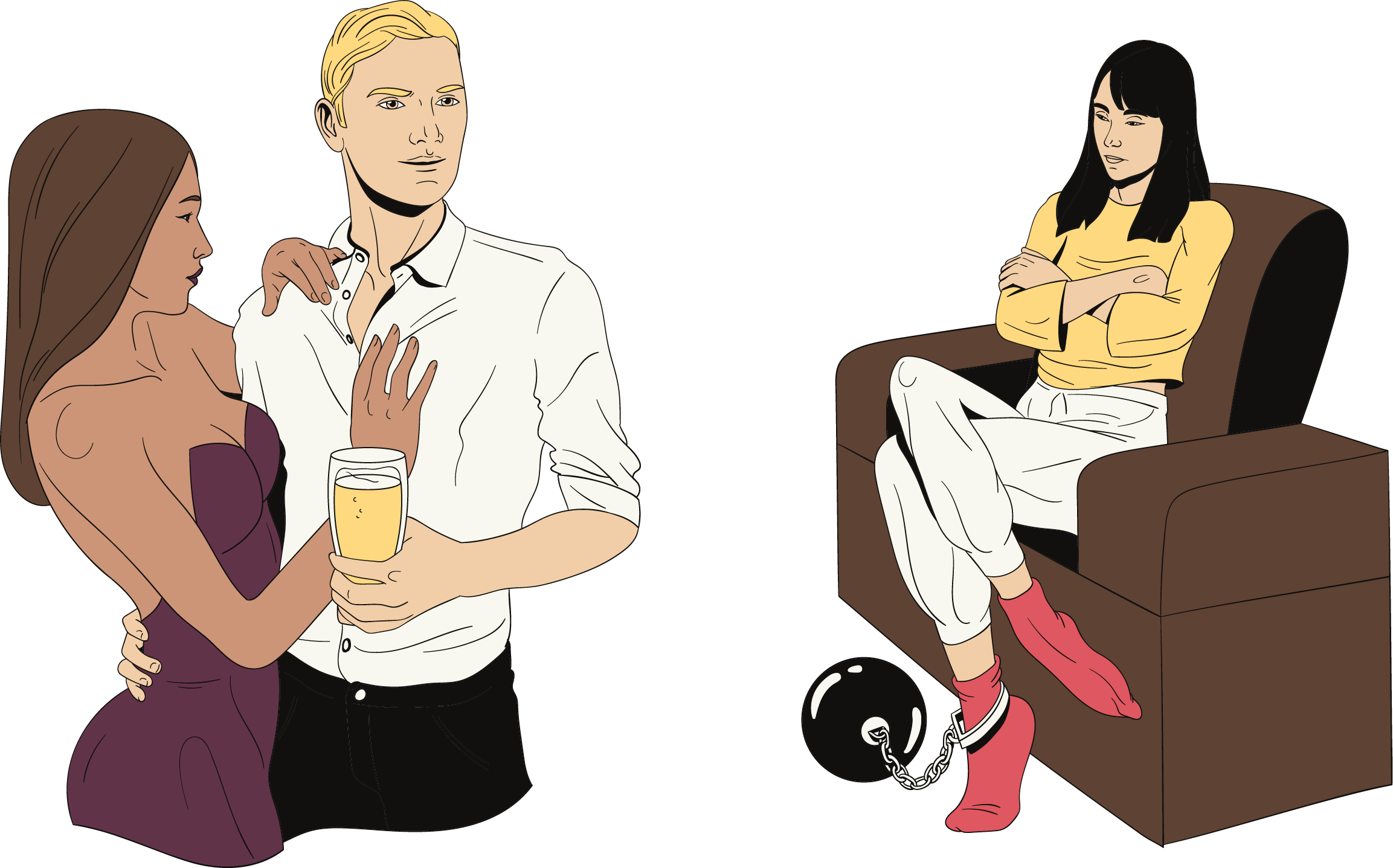 Some narcissists in an open relationship will try to get extra freedom for themselves, but not for their partner. Where they can do what they want, while you have to sit obediently on the couch at home.

This is one of the ways how a narcissist demands special treatment.

There are more. But this doesn’t always have to be a problem.

There is an advanced form of ”equality thinking” in certain parts of the Western world.

Men and women have to share household tasks. Finances have to be shared.

But if you look historically, you see that people with equal relationships is an entirely new phenomenon. Previously, there were often major inequalities between men and women in relationships.

Women weren’t necessarily against that

After all, there are significant advantages when a man takes full responsibility for earning a living.

It’s important to know what you want and to determine if whatever the narcissist wants, is going against that.

You’ll have to make a choice.

And if you decide you can’t be in the relationship with the narcissist, then it’s better to get out. 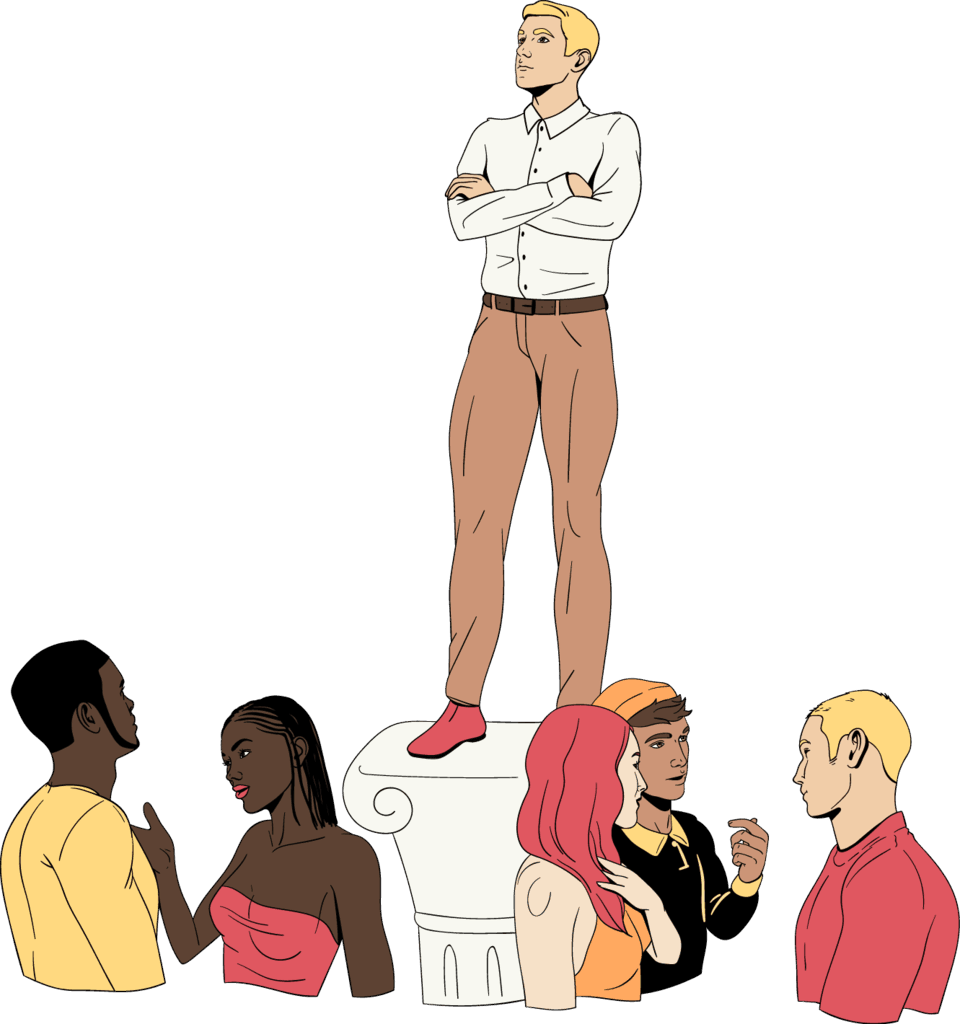 If you have a man who has this trait, it’s never pleasant.

Try turning that into something nice when you go out together.

A narcissist may have few friends. And if your group of friends is his biggest social network, then you’re stuck with a man who has little social value to add. 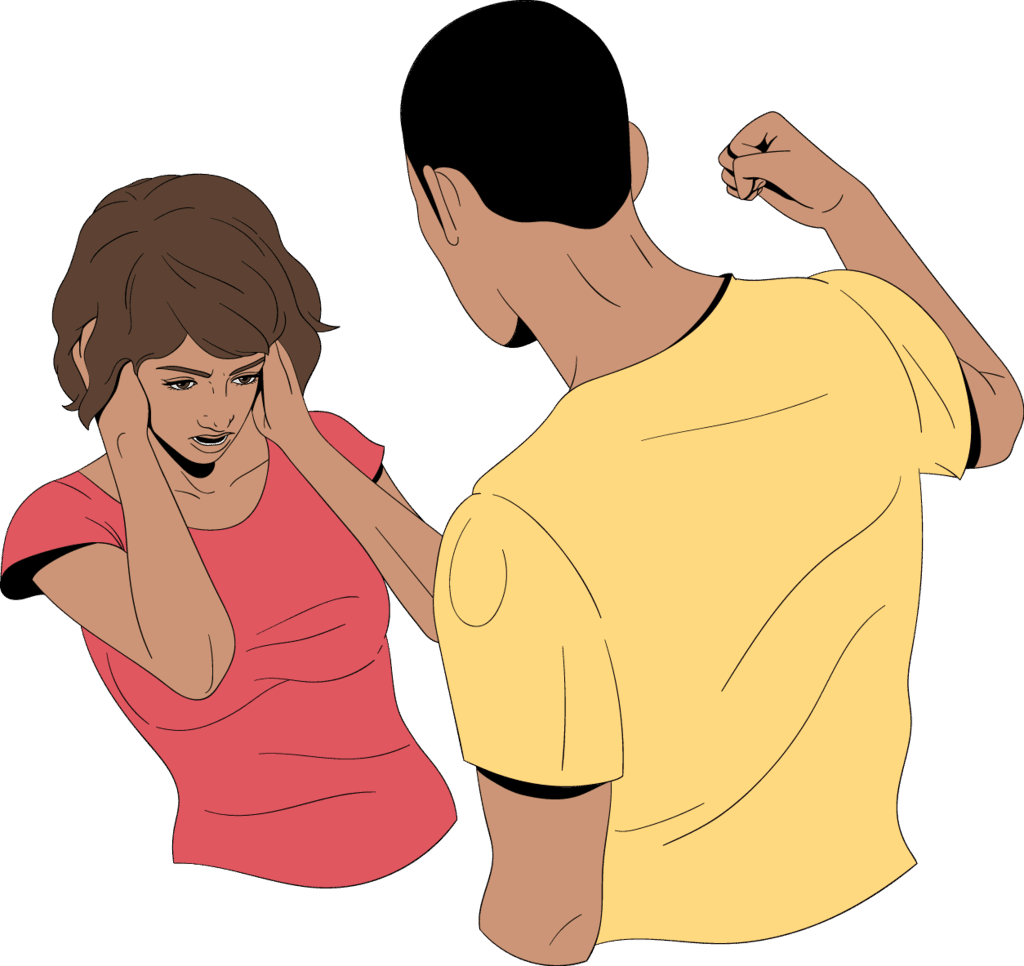 This is how a man with narcissistic personality disorder turns into a bad man.

It doesn’t necessarily mean he’s openly violent, but he can be.

It’s more than the way he treats you is far from kind. And it goes further than what you’d expect in a normal situation. 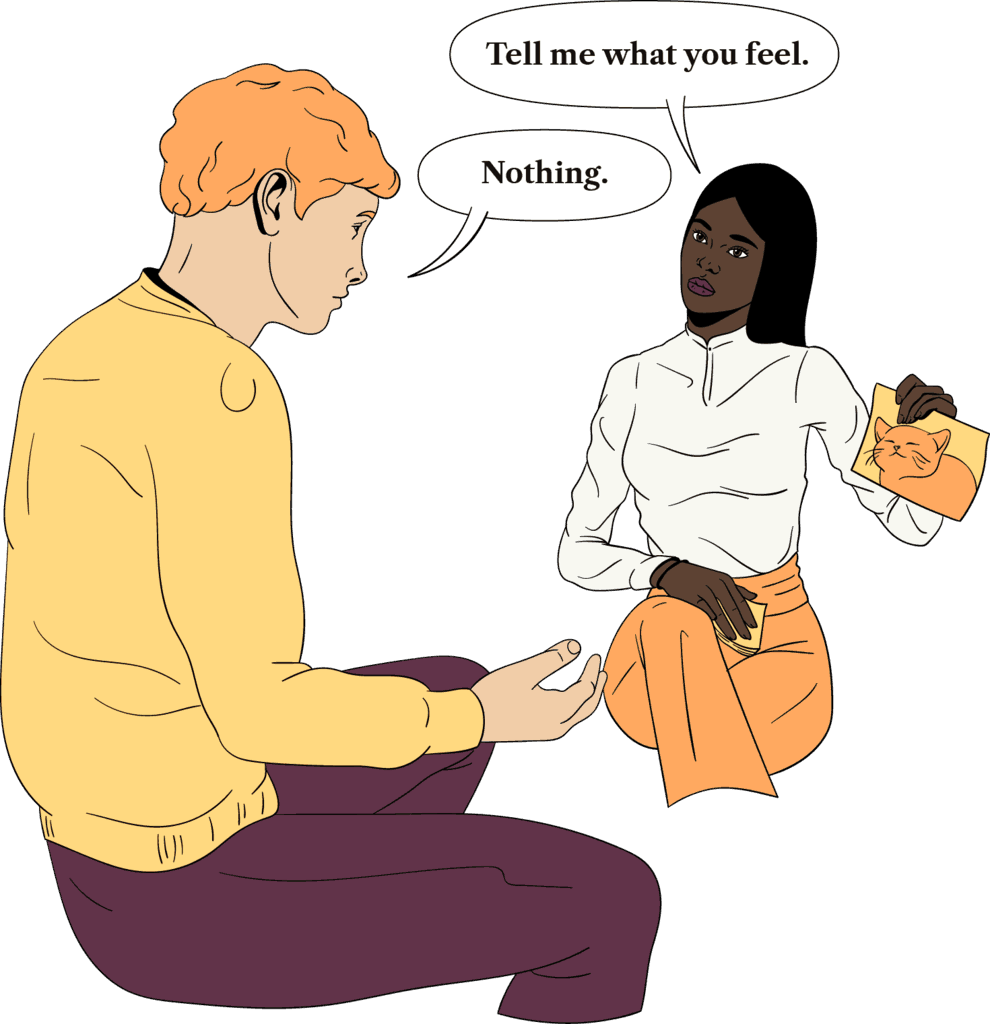 They used to say that a narcissist has a deep vulnerability, which he tries to disguise by behaving narcissistically.

But now science suggests that this may not always be the case. That there isn’t always such a vulnerable core. It’s more like there’s “nothingness“.

That means you can’t expect any vulnerability signs or emotional outbursts from such a narcissistic man. And in some ways, that can be very attractive.

How nice would it be if you never had to take the feelings of a man into account?

At least, not his sensitive feelings?

A narcissist can get angry when you do something against his will. And then he can become quite dangerous.

But feelings of vulnerability? He misses those in many cases.

The assumption that a narcissist is deeply insecure is, therefore, a myth. Also that he’s lonely, although this can happen of course. He won’t quickly be afraid, or aware of his actions.

If you are married to a narcissist and want an easy step-by-step plan on how to finally break free from his grip, read this article.

Hopefully, you’ll now have more insight into the real meaning of narcissism and the personality disorder in a relationship. Which makes it easier to recognize.

Symptoms of narcissism vary, but you have a broader frame of reference to interpret them and deal with them.

I wish you the best of luck with that.

Facebook-f
Instagram
Youtube
PrevPreviousIs He Losing Interest? 17 True Reasons Why Men Lose Interest In A Woman
Next13 Clear Signs Your Failing Relationship Or Marriage Is OverNext